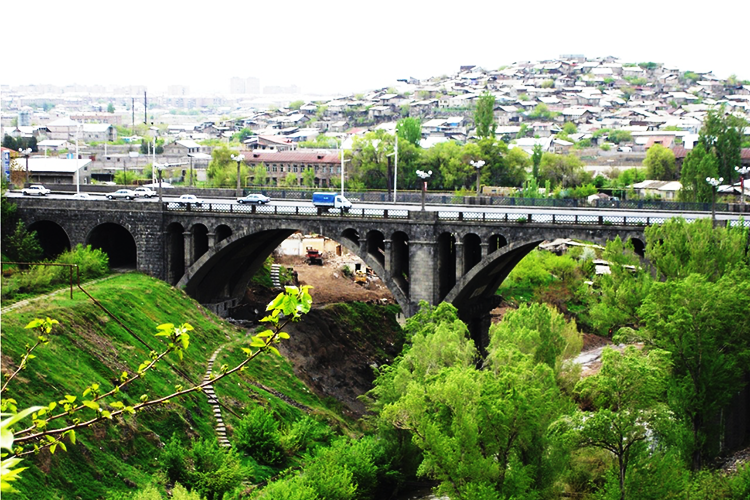 Yerevan’s Bridges and Their Secrets

Every city has its secrets. Bits of history that are long forgotten, or perhaps were never told in the first place. In Yerevan, its bridges are a window into history that is well worth exploring.

Here’s a list of Yerevan’s most notable bridges and the stories they have to tell us.

Most of Yerevan’s current bridges were constructed during the Soviet era, and are thus heavily influenced by both Soviet architectural styles and engineering methods. The Hrazdan Gorge Aqueduct was initially planned for industrial purposes only, originally designed as a reinforced concrete structure without any aesthetic value. But when the initial project was presented in the 1940s to Yerevan’s Chief Architect Mark Grigoryan, he refused to let that happen.

Instead, he assigned the design and the construction of the aqueduct to Rafael Israelian, one of the most prominent architects at the time. Israelian accomplished his assignment magnificently, creating an architecturally impeccable and beautiful aqueduct that blends in with the natural beauty of Hrazdan Gorge, greatly due to the dark color of its stone. The aqueduct has a length of 100 meters and a width of 5 meters.

The Haghtanak Bridge (Victory Bridge) is a three-span construction built in 1945 and named in honor of the defeat of the Nazi invaders. It measures 200 meters long, 25 meters wide, and 34 meters high. It was designed by engineer Simon Ovnanyan and architects Artashes Mamadzhanyan and Ashot Asatryan. There are many undiscovered and mysterious stories connected with this bridge, but the most famous of them involves a strange pillar made of an unknown material that couldn’t be scratched at all, let alone broken.

One of the workers accidentally found the pillar while digging the space for the three main pillars to support the construction of the bridge. However, this happened during the repressive years under Stalin, so nobody had the chance to speak out. The strange pillar was shortly hidden in a mass of concrete before archaeologists could explore the discovery. What is also interesting about the bridge is that when it was built, there were no tools or machines to make such perfect construction. It took the idea of “hand-made” to a whole new level.

This massive bridge, built in the early 1950s, uses multiple 98-meter high arches to support six lanes of traffic across the Hrazdan River in the heart of the city. The story of Kievyan Bridge or the Great Hrazdan Bridge contains some sad episodes, however. While it was of the biggest achievements in Soviet Armenian architecture, it was also one of the hardest to accomplish.

After much discussion, the planners decided to use German prisoners of war to build the bridge in order to save costs. However, due to poor oversight and poor adherence to standards, one of the arches collapsed during the construction, killing 47 people, including 22 Armenian workers and 25 German prisoners. Despite this, the project continued until its completion in 1955.

The Red Bridge, also known as the Old Bridge of Hrazdan or the Bridge of Khoja Plav, is the ruins of a 17th Century bridge on the Hrazdan River in Yerevan. It is one of the oldest bridges in Yerevan.

The “red” in its name refers to the construction material, red tuff. The bridge’s nickname,"Khoja-Plav bridge," points to Khoja-Plav, a wealthy man from Kanaker who financed its reconstruction.

The total length of the bridge was 80 meters and the height measured 11 meters. It had four arches, two of which were pointed arches in the middle of the span, while the other two arches were on the banks of the Hrazdan River.

Another bridge stood in the same place as the Red Bridge, until it collapsed during the 1679 earthquake. The bridge had provided economic connections between the Yerevan Fortress (where the Yerevan Ararat Wine Factory is now) and the Ararat Plain. It initially served both industrial and military purposes and had been periodically renovated. The last reinforcement was done in the 1830s.

Now, the bridge is half-ruined and no longer functional. It only serves as a reminder from the past, taking you back to Old Yerevan for a minute like a time machine revealing the details of Old Yerevan architecture through some surviving parts and artefacts.

So, if you want to learn about the history of Yerevan, its bridges can tell you a lot about it!