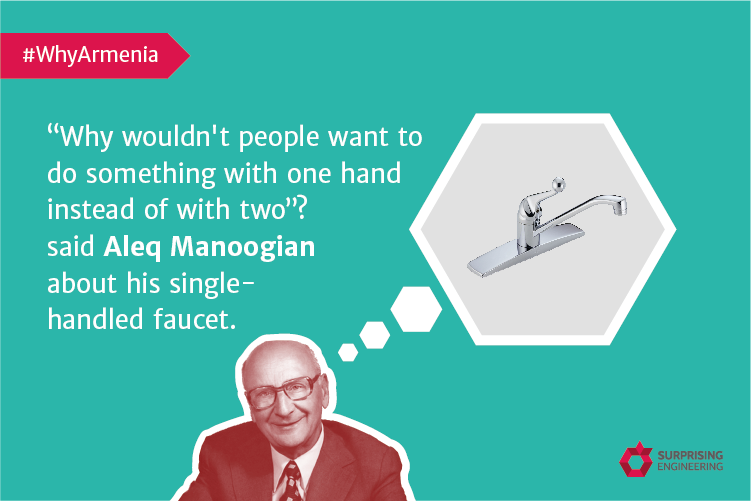 Aleq Manoogian was an Armenian-American industrial engineer, businessman, entrepreneur and philanthropist. He is mostly famous for his invention of the first commercially successful single-handled faucet design: the Delta faucet.

In 1952, while working at Masco Screw Products Company, a small but successful machine shop, Manoogian was approached by the inventors of the ball valve joint, which was capable of making hot and cold water run from a single tap. They were looking for someone to develop a faucet based on the valve. Since there were no single-handled faucets at that time, Manoogian was interested and agreed on the project. Two years later, the single-handled faucet was ready: it could be turned left or right to get hot or cold water, and be pushed or pulled to control the volume. He named the invention “Delta faucet” since the faucet was shaped like the fourth letter of the Greek alphabet. His product was a best-selling. His company had $3 billion in sales and had 38 percent of the domestic market for faucets.

Manoogian contributed to charitable organizations and educational institutions. Due to his philanthropic work, he became the first diaspora Armenian to receive the award Hero of the Armenian Nation and he was granted an honorary citizenship in 1994.

“Do not be satisfied with average performance. Strive for excellence”, said Aleq Manoogian. That’s exactly what he did!