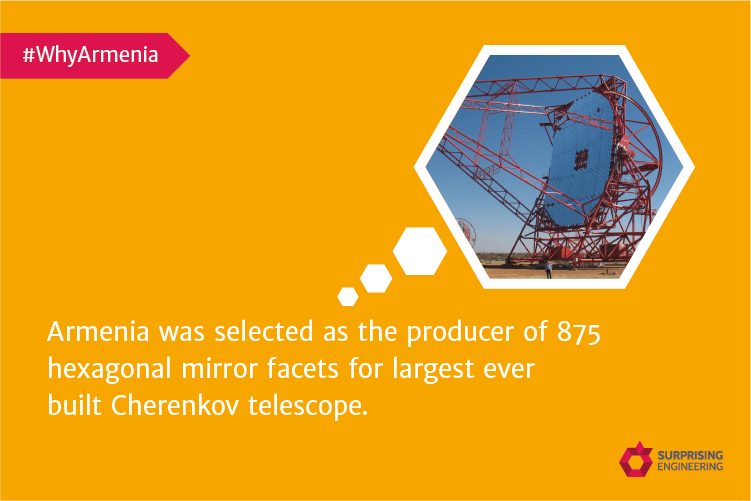 By looking at mirrors you can see more than the reflection of yourself: you can observe cosmic sources!

H.E.S.S. II is the world's largest Cherenkov telescope ever built, with 28-meter-sized mirror. The main function of the telescope is to allow its users to observe the most extreme phenomena that occur in the universe.
Armenia was selected as the main producer of the 875 hexagonal mirror facets for the telescope. The mirror facets were produced by Galaktika CJSC: a part of the department of physics and astrophysics at the National Academy of Sciences of Armenia.

The revolutionizing part of this instrument is that the quality of the images that are diffused is way better with four times more pixels per sky area: it is possible now to see more details. As Werner Hofmann, the spokesperson of the project notes.
“The successful commissioning of the new H.E.S.S. II telescope represents a big step forward for the scientists of H.E.S.S., for the astronomical community as a whole, and for Southern Africa as a prime location for this field of astronomy. H.E.S.S. II also paves the way to the realization of CTA – the Cherenkov Telescope Array— the next generation instrument ranked top priority by astroparticle physicists and funding agencies in Europe”.

In 2006, H.E.S.S. was awarded the Descartes Prize of the European Commission - the highest recognition for collaborative research - and in 2010 the prestigious Rossi Prize of the American Astronomical Society.

What do you think is the universe hiding from us? Read more.

Rafael Barkhudaryan: The mystery of math is enticing