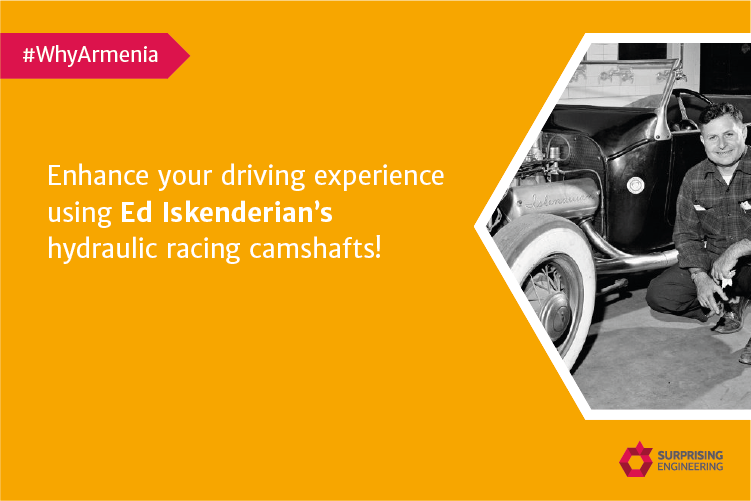 Using Ed Iskenderian’s camshafts is one way to win a car race!

Born in the United States to an Armenian family, Ed Iskenderian is famous among racers for his camshafts.

His parents ran a vineyard in the grapevine country of Tulare County, California. Due to the harsh weather conditions that destroyed the vineyards, the Iskenderians moved to Los Angeles where he attended the Polytechnic High School.

It is while working on his school project, which consisted of building a Model T Ford roadster, that he learned the fundamentals of mechanics. After graduating from high school, he began a machinist's apprenticeship. In 1939, he ordered his first camshaft from the great Ed Winfield who was unable to keep up with demand for his wares. So then Iskenderian thought: why not grind his own? He designed and built a camshaft himself. His cars always ran great and his cams' broad power curve made passing quicker, so he started grinding cams for a living. Little did he know that his business is going to grow big.

The popularity of economy cars and the importance of gas mileage among people gave Isky, as he’s better known, the idea of building the first hydraulic camshafts:  the SuperCams for economy/performance and the MegaCams for street/performance. Isky was the first person to use computers to design camshafts.

His innovation was not only centered around cams, he is also the father of hard-faced lobes, along with anti-pump-up and chilled-iron lifters.

In 1963, Isky was a founding member of the Speed Equipment Manufacturers Association, today renamed as the Specialty Equipment Market Association, which still has its original acronym, SEMA. He served as SEMA's first president, in 1963 and 1964.

Art Within Art: The Cafesjian Center for the Arts