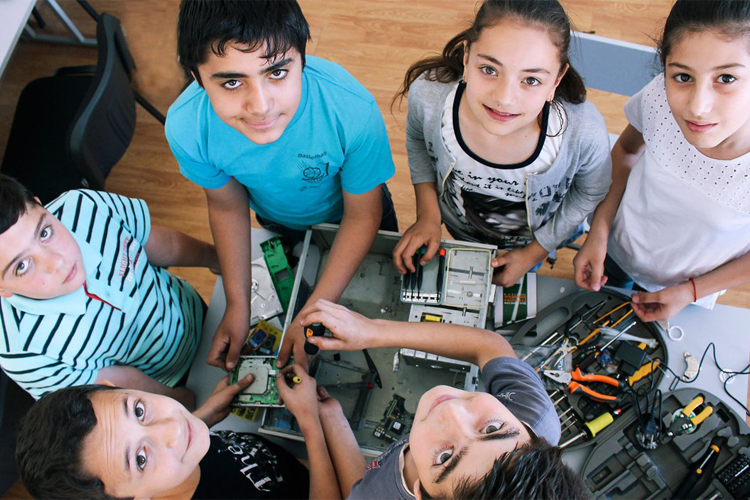 The victory march of Armenian kids continues! We already have two world-scale competitions from where they’ve come back with really impressive results. Presenting them in-detail below:

“Arm Cyber Kids”, the Armenian team that participated in the World Robot Olympiad for the first time, ranked 21st out of 21,000 teams.

Prior the international competition, a competition in Armenia was held on a national level. Nine teams from various schools competed against each other, and the winning team was the one who had the opportunity to participate in the World Robot Olympiad, in New Delhi.

The motto of this Olympiad was “The fight against waste”. Participants had the task of creating robots that would help children clear the school road, collect the garbage and place it in garbage cans, as well as perform other tasks.

The World Robot Olympiad gave an opportunity for students to work on their logical thinking skills, engineering capabilities and creativity.

AYB Educational Foundation is the exclusive organizer of the national stage of the Olympiad. Its sponsor is Creative Educational Technologies (CET), the official distributor of "LEGO® Education" Armenia.

An Armenian team made of 16 students participated in the 13th International Zhautykov Olympiad. The team competed against 57 teams from 19 countries. This Olympiad took place in Almaty, Kazakhstan from the 12th to the 18th of January.

The Armenian team was led by Robert Zohranyan, a physics teacher, and Grigor Aghababyan, an informatics teacher. They teach at the Physics and Mathematics school after A. Shahinyan and Quantum College respectively.

The team came back to Armenia with 4 silver medals and 8 bronze medals.

We are looking forward to more great news from this young yet smart generation of Armenians!