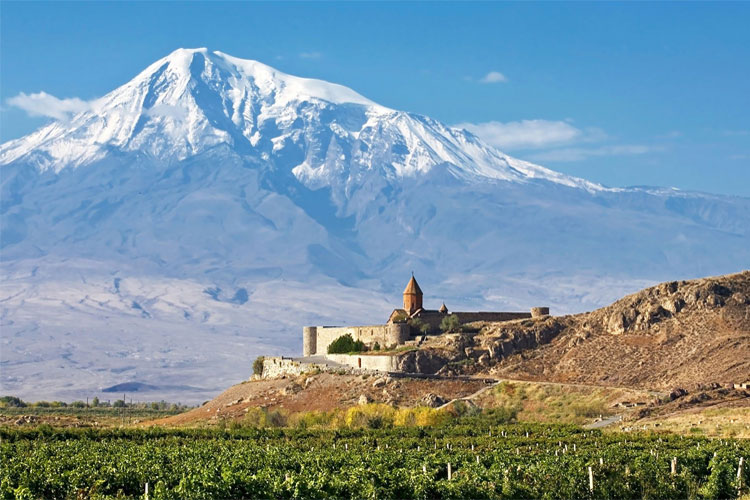 Going on with the list of reviews by famous media representatives, we present the review of Telegraph about the 25 most noteworthy things worth mentioning about Armenia. This is another example of how Armenia is perceived through the eyes of foreigners. To be honest, we are really impressed by the results! So have a look.

It’s 25 years since Armenia gained independence from the Soviet Union, and to mark the occasion Telegraph Travel has unearthed a few things you probably didn't know about the country.

At least that’s what the archaeologists claim: in 2011 they discovered what is thought to be the oldest winery on the planet, found, of all places, in a cave near the village of Areni.

2. It was the first nation to adopt Christianity…

Christianity spread to the now-defunct Kingdom of Armenia soon after the death of Jesus, though it took until the early 4th century for it to be adopted as the state religion. Still, that was earlier than any other country on the planet.

From millennia-old monasteries to crumbling cathedrals, Armenia is scattered with Christian places of worship: they don’t call this the “land of churches” for nothing. It’s impossible to identify the best basilica in the land, but one of our favourites is the 9th-century Tatev Monastery; a stunning building in an area of unremitting beauty.

4. Chess is part of the curriculum

5. It lost 1.5 million people in the Armenian Genocide

In 1915 the Ottoman government orchestrated the systematic extermination of 1.5 million Armenians, an act known as the Armenian Genocide. Turkey, the successor state of the Ottoman Empire, denies it was genocide, but governments of 28 countries – including Britain, Russia and France – recognise the events as an act of genocide.

The events of 1915 forced millions of Armenians to flee abroad, where they established strong communities in the US, Russia and France. There are thought to be some 5.6 million people of Armenian descent living abroad, which is greater than the population of Armenia (3 million).

7. It has celebrity connections

Armenia is the ancestral homeland of Cher, Andre Agassi and Serj Tankian, the frontman of American metal band, System of a Down, one of the groups at the forefront of publicising the injustices of the Armenian Genocide. Armenia is also partly responsible for the Kardashians - dad Robert was second generation Armenian American.

8. Armenians think they know where Noah’s Ark is

There’s a widely-held belief in Armenia that Noah’s Ark is embedded in ice atop Mount Ararat. Despite many expeditions, said ark has never been found, but that doesn’t stop it appearing on Armenia’s coat of arms.

9. Its national symbol is in Turkey

Snow-capped Mount Ararat is the principal national symbol of Armenia and is considered by many Armenians to be sacred. The massif has featured prominently in Armenian art and literature and is depicted on the country’s coat of arms, however it is actually located within Turkey. It hasn’t always been that way: the holy mountain has been passed between the Kingdom of Armenia, Persia, Russia and Turkey.

10. It has one of the world’s oldest capitals…

The Armenian capital, Yerevan, is one of the world’s oldest inhabited cities, constructed as it was 29 years before Rome. Overlooked by the snow-capped Mount Ararat, the capital has a bewildering number of historic buildings, not to mention a clutch of excellent museums.

Yerevan gets its pretty pink hue (and moniker) from the rosy volcanic rock that was used to construct many of the city’s buildings.

12. Churchill had a taste for Armenian cognac…

During the Second World War, Joseph Stalin shipped several dozen cases of Armenian cognac to Winston Churchill, which the then-British prime minister consumed with gusto. His love for brandy was no secret: by his own estimate he had drunk enough brandy to fill three railway carriages by the time he was 71.

13. In fact Armenian cognac oiled the wheels of Yalta

The Yalta Conference – a meeting in the Crimea between Winston Churchill, Joseph Stalin and Franklin D Roosevelt to discuss Europe’s post-war reorganisation – is believed to have been largely fuelled by Armenian cognac and wine. One of Churchill's aides at Yalta famously wrote about the then-British prime minister “drinking buckets of Caucasian champagne which would undermine the health of any ordinary man”.

14. It has a record-breaking cable car

According to Guinness World Records, the longest non-stop double track cable car is the Tatev Aerial Tramway, which clocks in at 5,752 m (18,871ft) long. The spectacular cable car connects the village of Halizor with the aforementioned Tatev Monastery, offering spectacular views across the Vorotan River Gorge en route.

Relations between Armenia and neighbouring Azerbaijan have been fraught for years and the two countries are technically still at war. The issue centres around Nagorno-Karabakh, an area of south-western Azerbaijan populated largely by ethnic Armenians. Supported by Armenia, it tried to breakaway from Azerbaijan in 1994 sparking a bloody war between the two nations. A Russian brokered ceasefire was signed in 1994, but fresh fighting broke out this year.

16. You can go skiing there

The main ski resort in Armenia is Tsakhkadzor, which has some 27km of slopes, plus six lifts to get you up there. Expect to pay around 8500 Armenian dram (about £17) for a day ski pass.

Armenia is a twitchers delight, home as it is to 345 of Europe's estimated 530 bird species. Highlights include falcons, swans and eagles, which also feature on the Armenian coat of arms.

18. The people are as hard as nails

Armenia won one gold and three silver medals at the Rio Olympics, all of which were in wrestling or weightlifting. Enough said.

Many Armenians were delighted to hear about Shakira’s stunning faux pas at a concert in neighbouring Azerbaijan, whereby the Colombian singer walked on stage carrying her national flag upside down, thus turning it into the Armenian standard. Oops.

20. Its bread is Unesco-listed

Dinner tables are rarely without huge piles of lavash, a tasty flat bread that is the cornerstone of Armenian cuisine. So important is this humble dish that it was placed on Unesco’s list of Intangible Cultural Heritage in 2014.

21. It boasts the largest lake in the Caucasus

And what a beauty she is, too. Covering one sixth of Armenia’s territory, Lake Sevan is overlooked by the stunning Sevanavank monastic complex, which is one of the country’s top attractions.

22. Its women are the sexiest in the world

At least that’s according to a dubious poll of 44,000 US men, who voted Armenian women the world’s sexiest. The results were perhaps skewered by the ubiquity of Kim Kardashian, who famously “broke the internet” with her nude photoshoot for Paper magazine.

23. They don’t have much luck with the footy

Despite being Armenia’s national sport, football is not something it performs particularly well at – at least not on the international stage. Since gaining independence from the Soviet Union, the country has failed to qualify for either the UEFA European Football Championships or the FIFA World Cup.

Which are: the monasteries of Haghpat and Sanahin; the cathedral and churches of Echmiatsin and the archaeological site of Zvartnots; and the monastery of Geghard and the Upper Azat Valley.

When the Armenian alphabet celebrated its 1,600th birthday in 2005, the authorities erected 39 stone statues depicting its letters near the final resting place of the man who created it, Mesrop Mashtots. Visitors can visit the giant letters, which stand proud in the town of Aparan.

Yerevan is in One More List for New Digital Nomad Destinations