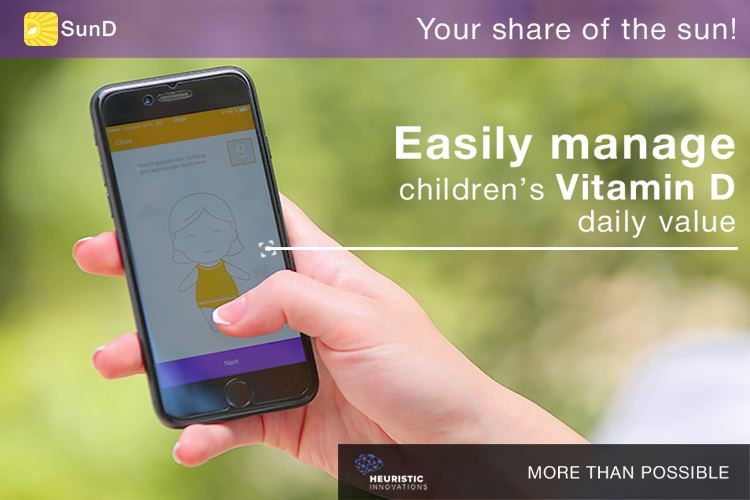 In an era where mobile apps are a necessary part of our lives, SunD, a new app designed by an Armenian startup, Heuristic Innovations, will make your iPhone camera much more useful.

SunD allows parents to manage their children’s vitamin D Daily Value intake from the sun. Within months after its development, SunD was nominated as the best and most innovative mobile solution from Armenia for the 2016 World Summit Awards, an international platform for “cutting-edge innovation”. SunD made the shortlist as a nominee for the “Health and Well Being” category.

Currently, SunD is live on Indiegogo and the Beta version is available on the App Store. The app is planned to be publicly launched in August-September 2017.

It all started with a walk

A couple of years ago, Vahagn Hakobyan, the founder of Heuristic Innovations, used to go for daily afternoon walks with his then two-year-old daughter. After each walk, he could not help but notice the benefits of his daughter enjoying her time spent under the sun. “But I had a question that remained unanswered – how to make sure that my daughter was getting enough sunlight and enough vitamin D for the day,” says Hakobyan.

He took his search to the internet. True, there were plenty of hints helping parents to guess if their kids had enough sunlight for the day, but not a single device or app to state that scientifically. He also found out that about 1 billion people suffer from vitamin D deficiency.

A physicist by training, Vahagn Hakobyan had longed for some time to experiment in app development. In 2016, he started Heuristic Innovations, which focused on solving real-life problems through mobile apps that would upgrade devices already used in everyday lives.

“The idea of creating innovative tools for mobile devices to solve real and universal challenges was very exciting. The apps that we create are furnishing devices around us with surprising and valuable features,” says Hakobyan. Therefore, he grouped together a small team of professionals and scientists to generate optimal solutions through creative and scientific approaches.

The first app to be developed was SunD – the first and only app allowing parents to manage their children’s daily Vitamin D intake from the sun.

“Our team includes Doctors in Physics and Mathematics from Yerevan State University, who developed the first app based on the Heuristic Method,” explains Hakobyan.

SunD is the world’s first app to use mobile cameras to scan for Solar UV index and calculate vitamin D.

Created for the wellness of children, SunD is a smart detector that evaluates the UV Index without the need of connecting to the internet or extra accessories, such as index meters or additional gadgets. All you need is a mobile device camera to make sure that your child has received enough sunlight on any given day.

Despite the complexity involved in creating and developing the app, SunD has a user-friendly interface.

At present, Heuristic Innovations is working on developing the app for all cell phone devices with the same focus on perfection as they did on the iOS. At the same time, a version of the app for grown-ups is also in the making.

“We want our solutions to be attainable for the whole world,” says Hakobyan.

In fall 2017, Heuristic Innovations will be attending the 2017 World Summit Awards, among the producers of some of the world’s best digital innovations with high impacts on society.