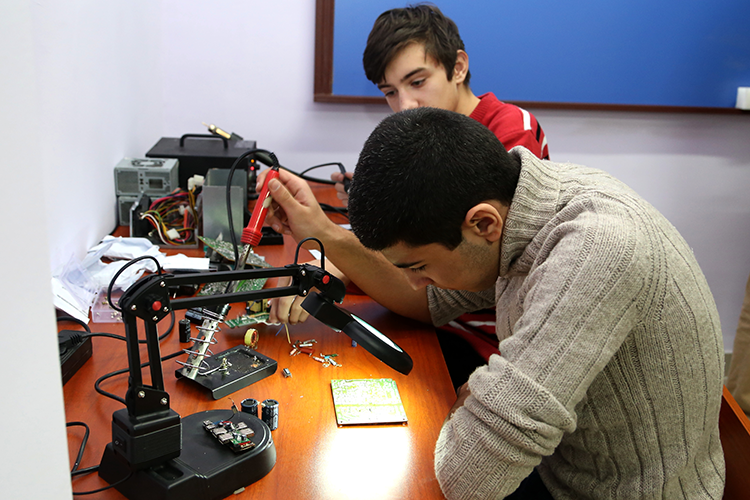 Instigate Mobile, one of the companies within the big Instigate family has recently participated in IoT Tech Expo Global 2017 and represented Armenia side by side with world-renown companies from all over the world. We talked with Instigate Mobile Co-Founder and CEO Artak Chopuryan, and CTO of Leviathan Satenik Mnatsakanyan about the company and their participation in the expo.

WA: Tell us a bit about the company. How was Instigate Mobile founded?

Artak: Instigate Mobile started as a department within the main company Instigate, which was founded in 2005 as a software service company working with partners from all over the world. Web and mobile technologies were not there at the beginning. However, in 2008 with the emergence of the modern trends in mobile and web, we were getting more and more requests in these fields. So we decided to extend the scope. That’s how it started within the main company as a small group and after a few years in 2012 the need for separation arose because the whole production process was different. The web and mobile industries are different with their skill set, approaches, etc. Since then Instigate Mobile goes on as a separate company still remaining as a part of the big Instigate family. We have such projects where we enroll different spin-off companies of Instigate to provide more complex solutions.

WA: How about the foreign clients? What do they appreciate most in the Armenian workstyle?

Artak: Most of our clients really appreciate working with us. Our business model is about creating longer business relationships with most of our customers engaging them into long-term projects. We always receive positive feedback. Basically they appreciate the wide range of technologies applied; the fact that Armenian specialists are deeply aware of the technologies, programming, the science part of each project, etc. There are still things we need to improve in terms of communication, management, and so forth, which I believe are the legacy of the Soviet education. It’s not just about us, but it’s a thing specific to many Armenian companies. Another thing I’d like to mention is Diaspora. Many of the projects we get (and I believe this is true about many other companies as well) are coming through Diaspora. Many of the potential clients have an Armenian working with them, are acquainted with the Armenian working style and have some trust for it. That’s like having an image before engaging into business. That’s why the “Why Armenia” idea should be also spread to Diaspora primarily, because Armenians living outside are the ones to represent the nation first of all.

Artak: We are always flexible and open for new opportunities. During the recent years we’ve discovered new markets and have been involving in new spheres like IoT. We’re trying to go with the trends and educate our partners about the new technologies they might use. We’re in the phase of actively engaging in new industries, which helps us gain more knowledge, experience and ideas which we can use in Armenian industries as well. That’s, I think, our global strategy for the coming years. Bringing in the IT innovations to other industries, and doing it for Armenia as well.

WA: How about the IoT tech expo you’ve just participated in? What were your impressions? And why did you choose this expo?

Satenik: We were there as Instigate Mobile but we were representing the whole company. There were two conferences running in parallel, one devoted to blockchain and the other to IoT. A lot of representatives from different countries and the key players of the field were there. The idea was that by involving all of Instigate companies representing different directions, we were able to present complex and interesting blend of solutions to both vertical industries and horizontals. Or in other words showing “Surprising Engineering!”. Armenia is becoming more recognized in the world. Our technologies were interesting for the visitors and we’re expecting feedback and follow-ups this week.

Artak: One reason for choosing this expo was having a chance to introduce our solutions to the UK market. And another thing was that we wanted our mid-level management team to take part in such events, to understand the sphere better and to gain more practice. It was an amazing experience for them, presenting the company and the country on a global scale. So in whole, the participation in the expo was a big success and we’re still working on it. These conferences are going to be continuous and the next expo will be organized in 1-2 June 2017 in Berlin, followed by another one in 29-30 November in San Francisco.

In general, it’s quite interesting to see how people who seem to be unrelated to technology get interested in IoT and try to implement these technologies somehow for their spheres. We see that trend in here as well, and that should bring new solutions and innovations to Armenia.

WA: So in order to sum up, as one of the leading IT companies in Armenia, how would you evaluate the current state of Armenian IT?

Artak: I think we have significant growth rate but we should aim for more. There are countries like Belarus which have higher growth rates in IT than us. So we need to try to be the first. We really need to integrate IT into other industries and they should also be interested in IT, taking part in events like Digitec, business forums, leadership meetings, trying to invest more time and resources to use these technologies. It should be a result of mutual cooperation between IT and other industries.

Satenik: And in my opinion, one of our biggest achievements is that in 2019 the World Conference of Information Technology (WCIT) is going to be held in Armenia. We need to be ready for that.