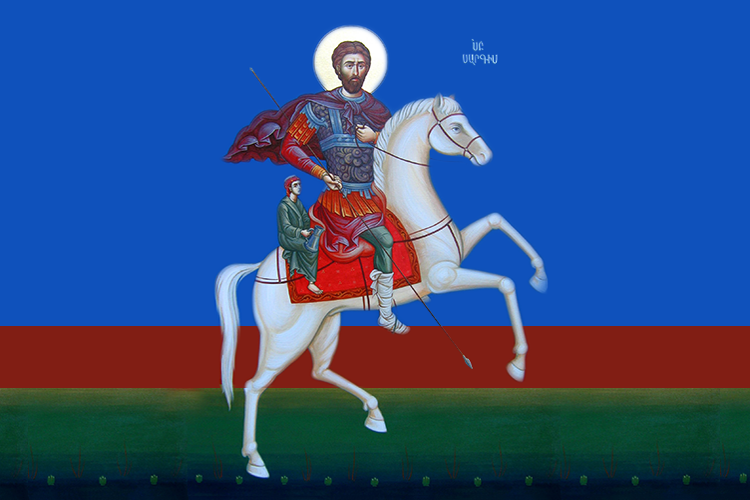 Celebrating Feast of St. Sarkis, One of the Favorite Holidays in Armenia

Valentine's Day is the global lovers' day almost everywhere. But Armenians have their own national lovers' day celebrated every year. It's the Feast of St. Sarkis.

St. Sarkis is one of the most beloved saints for the Armenian nation.

According to the story, St. Sarkis was a courageous and noble soldier appointed as the prince and General in chief of the region of Cappadocia bordering Armenia. Because of the persecutions against Christians during reign of the king Julianos the Betrayer, St Sarkis and his only son, Martyros, came to live in Armenia, and the Armenian king Tiran, grandson of Tiridates, received them very well. When they learnt that Julianos is moving towards Persia with a big army, St Sarkis went to Persia to stop the king and to protect the borders of Armenia. Thus he started serving in the army of the Persian king Shapouh as the captain of regiments. But Sapouh, seeing that his soldiers start converting to Christianity under the influence of the noble captain, ordered him to worship the fire. St Sarkis refused categorically and the annoyed crowd attacked him and his son, Martyros, and killed the latter. The saint was put into prison and remaining unshaken in his faith was beheaded. After the martyrdom of the saint light appeared over his body. 14 soldiers-companions of the saint were also martyred for the sake of Christian faith. Henceforth St Sarkis is recognized as a Christian saint of Armenian Church.

He is also accepted as the Patron of youth and love.

Apart from the religious feast dedicated to St Sarkis, Armenians also have various folk traditions for this feast.

According to the national tradition, on the eve of the feast, in the evening, young people eat salty cookies and believe that the one who gives them water to satisfy their thirst in their dreams will become their companion for life. Also, on the night preceding the feast, people place a tray full of gruel before the door believing that while passing near their door at dawn St. Sarkis will leave his footprint on the gruel symbolizing the fulfillment of their dreams as well as leaving a sign about a young not yet married person from that house to get married in the same year.

On the day of the feast a Divine Liturgy is celebrated in all churches named after St. Sarkis. Following the Liturgy, a special ceremony of blessing of young people is offered.