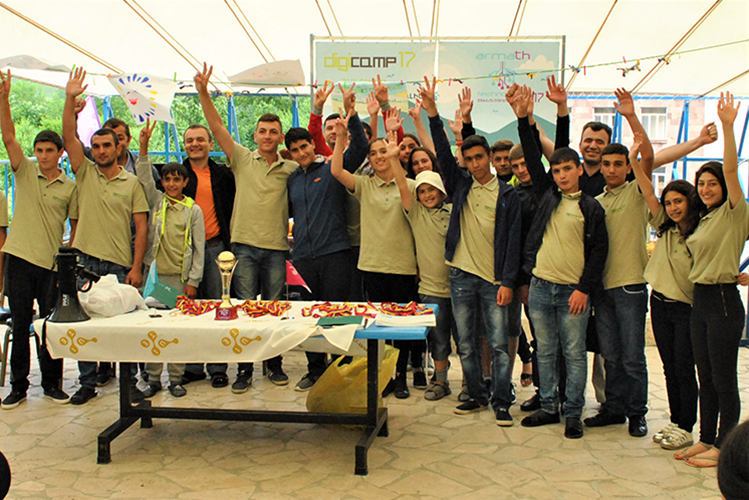 For the past five years, Digicamp has been the summer camp where young Armenian innovators come to play and have fun. During very productive ten days spent at Digicamp, around 45 teenagers from around Armenia enjoyed a full program of active leisure and tech fun punctuated by sessions of inventing, designing and creating robots, drones, and smart appliances.

This year Digicamp, an annual summer tech camp organized by Union of IT Enterprises (UITE), took place during June 29- July 8, 2017. The talent of Digicamp participants burst through a series of innovative tech project concepts that were submitted to the camp jury. On the last day of Digicamp, the participants exhibited their concepts and the jury awarded three of the best concepts.

The team led by 14-year-old Aram Poghosyan was awarded the first place. Aram’s team presented not one, but two concepts: Smart Light and Talking Gas. Smart Light controls a light bulb through mobile phones. Talking Gas will present gas leaks through voice alarms and send text messages to the apartment owner in case the gas is not turned off within five seconds after the alarm goes on.

Body Power, another innovative concept for a created by Tatul Khachatryan’s team was awarded the second place. Body Power produces energy through utilizing the thermal energy produced by our bodies. Designed for hikers and mountain climbers, the person will wear the belt-shaped appliance and convert his body’s heat into energy to charge his phones and other appliances.

3rd place winners were the team headed by Khachik Movsisyan, who came up with the concept of an online physics laboratory featuring physics laws and formulas. This project concept, titled “World of Physics,” may serve as an educational material for teachers and students.