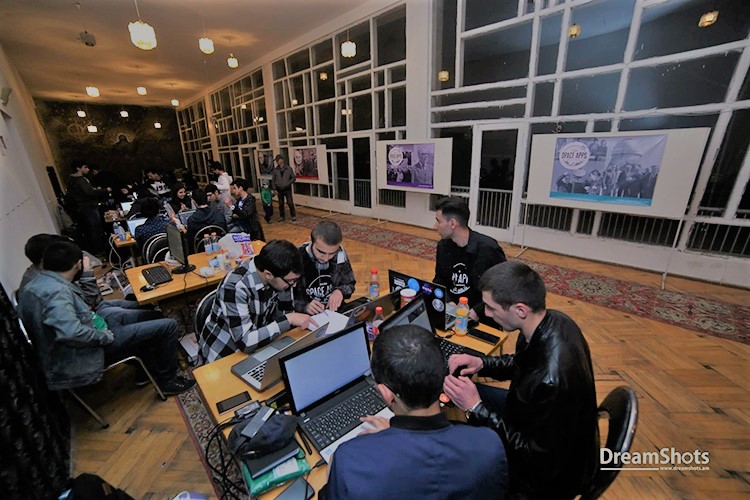 NASA Space Apps Challenge 2017, a 48-hour global event in cities all over the world, took place on April 29-30. For the second year in a row, Armenia took part in the challenge with a local competition staged at Byurakan Astrophysical Observatory.


During the 24-hour competition, 14 competing teams from Armenia addressed real-world problems on Earth and in space and solved challenges that could help change the world for the better. They first presented their innovative ideas and solutions to a local jury, to be followed by presentations to an international jury. Locotech team was announced to be the winner.

The teams were competing in the following five categories:
1. The Earth and US / #TheEarthandUS
2. Planetary Blues / #PlanetaryBlues
3. Warning! Danger Ahead! / #WarningDangerAhead
4. Our Ecological Neighborhood / #OurEcologicalNeighborhood
5. Ideate and Create / #IdeateandCreate

Locotech team members Gevorg Hovhanisyan and Gurgen Hayrapetyan used given from NASA to develop a model for next generation agricultural community that will automatize agriculture and improve productivity. The smart agricultural system will receive information at any given moment on the humidity of the soil and the temperature of the land. The system will also automatically irrigate the land and provide its safety, sending alarms in case of intrusions by other people or animals.

The second place winner was a project titled VON, a large online dictionary of science and technical terminology, based on NASA database. The website also offers its users the option to log in and edit the content, as well as add new content.

The works of the Armenian teams will be presented to the international jury composed of world-leading IT experts and specialists.

NASA Space Apps Challenge is one of the world's largest hackathons with over 25,000 participants from 69 countries. The first local stage of the competition was organized and hosted by X-Tech and Locator CJSC.