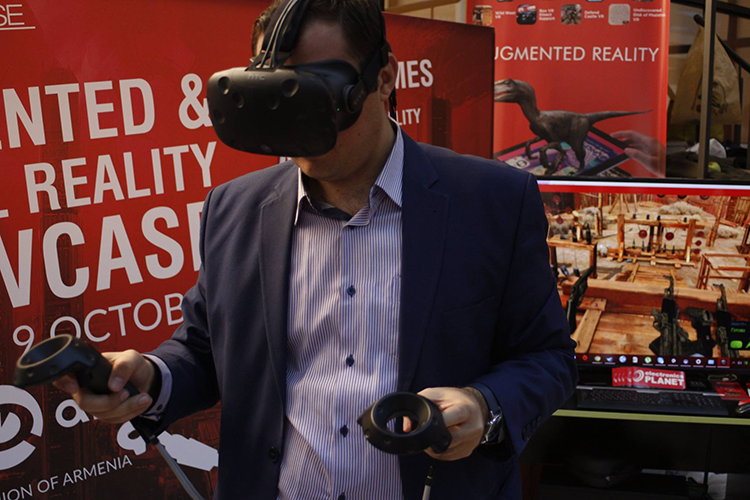 ARLOOPA is an augmented reality (AR) and virtual reality (VR) app and game development company. This time, we talked to ARLOOPA’s CEO, Arman Atoyan about the company and its plans and perspectives.

WA: A couple of words about ARLOOPA; where did you start and where are you now?

Arman: ARLOOPA started in 2014 as a spin-off of X-TECH, and then we decided to make it a separate brand. So it began with the ARLOOPA app in 2015. Before that, we were busy with creating the design of brand, development of website and creation of other elements. We started with a really great project. We worked with Coca-Cola and created a Christmas app for them, which was the hit of the Christmas season. In December, it was the top app in Google Play and Apple Store. It was downloaded 50,000 times. This was a great start for us, and any company we cooperated with after that gave us good credit upon hearing this success story. We did this project with our partner, Aurora Baréalisse creative marketing agency.

When Google introduced Google Cardboard in 2015, we realized this was a good signal to start developing VR (Virtual Reality), too. We did a really impressive job. During the last year and a half, our team created 25 VR apps and games, which are now available in stores. The Cardboard games we created made up 1% of the 50 million downloads for Cardboard apps, which was announced in 2016 at the Google IO conference.

Since Google Cardboard, we have expanded to the Oculus platform. Our apps are available in the Oculus store. We’ve also just finished a project for the HTC Vive platform.

We’re also pretty actively developing the ARLOOPA platform. We want to create a tool that lets people create their own Augmented Reality experience even without any technical knowledge.

We also did a successful campaign with the Ministry of Culture, creating the ArmCulture app. Currently, we’re seeing a positive wave coming from other industries that show attention for the VR/AR technologies. So this is why organized the AR / VR Club Meetup on March 9 in ISTC, where people interested in this technology could meet and share their knowledge, projects, and experiences. This way, we want to create a community of people interested in this tech and to accelerate the development of the field in the long term. Our resources alone are not enough to realize all the projects we would like to, and we are ready to mentor and guide other startups and help them develop their own projects using the tools we’ve already created.

WA: Tell us a bit about your cooperation with foreign partners. What do they think of working with Armenians?

Arman: In our case, the clients are really impressed by the speed and quality of our work. When we say we’ve created 25 VR apps and games, they are surprised to hear that we are not a 100-person company! They are also excited when they learn that we’re quite far from the Silicon Valley, but we’re still keeping up with the modern trends perfectly.

WA: What great news should we expect from ARLOOPA in the near or maybe distant future?

Arman: Currently, we are working on two AR projects. One of them is InteriAR, which lets you see your own living space with the objects you might want to purchase. The other one is the public version of ARLOOPA . It will allow everyone to create their own AR experience. We also have a great project coming with the Ministry of Culture. We can’t disclose the details yet, but it’s in the negotiation and development phase.

WA: What is your message to the Armenian IT community? In what way do you imagine its progress and success?

Arman: Our message is that we feel that new tech is coming in a big wave, and we’re ready to take as many people with us as possible to meet this wave and take the championship. We’re even discussing with the government how to involve these new technologies in the governmental sector as well. Ultimately, this can become a message to big companies like Microsoft, Facebook, Google signaling that Armenia is ready to accelerate this type of projects here. We’ve even purchased the AR-MENIA.com domain, so that we can position ourselves as a hub for AR technologies, sending the message to the world that we are able to implement such technologies in several spheres. In the long run, this message might also reach big players.

Register an Asset in Armenia in Just 7 Days