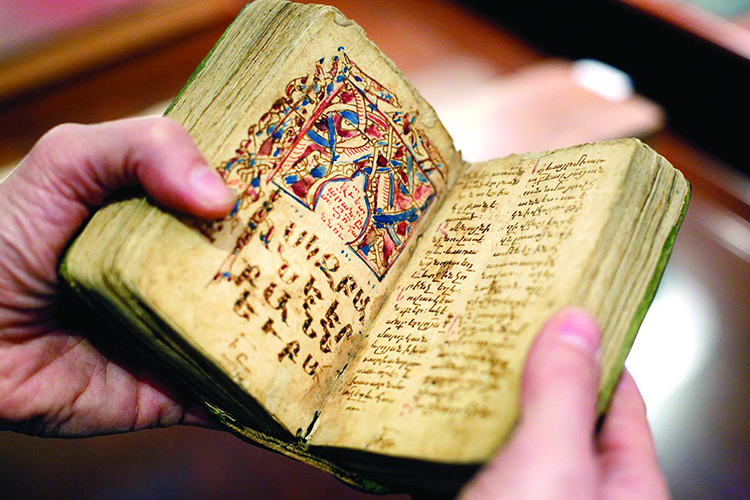 Armenian manuscripts have a rich history and cultural legacy. They have existed since the invention of the Armenian alphabet in 405 AD. Each of the manuscripts, which were all hand-written through the 16th century, is an exquisite work of art, featuring jewels, beautiful illustrations, and an ethereally bright color palette that seems to have withstood the passage of time. The secret behind this phenomenon is the use of natural paint and the hard work of the masters who made the manuscripts.

The process of writing a single book could take a lifetime, depending on the book’s size. Initially, they were all made of parchment, which was made mainly from the leather of domestic animals, such as lambs or calves. After the preparation of the parchment and ink, the letters (calligraphy and spelling) were added, followed by the marvelous illustrations and finally completed with stitching and interlacing.

There are for about 30,000 Armenian manuscripts all over the world, the majority of which are kept in Matenadaran. Msho Charantir (Homilies of Mush) is the biggest manuscript in this collection, measuring 55.5 cm wide and 70 cm long and containing 1,208 pages. The 28 kg book was written between 1200 and 1203.

However, other exemplars of Armenian manuscripts can be found in other museums and libraries, too. For example, The Rare Book Room of the Toledo-Lucas County Public Library is home to a manuscript handwritten by Armenian monks in 1351, the oldest book in the library’s whole collection. (The oldest item in the collection isn’t a book; it is a Babylon clay tablet believed to be 4,000 years old.)

The Toledo-Lucas County Public Library’s manuscript is not a complete Bible, but it contains the Gospels of Luke and John. Its leather cover contains little holes, which may have once been filled with jewels, as the special collections librarian Edward Hill suggests. “Some of these books go beyond books and are works of art,” he added.