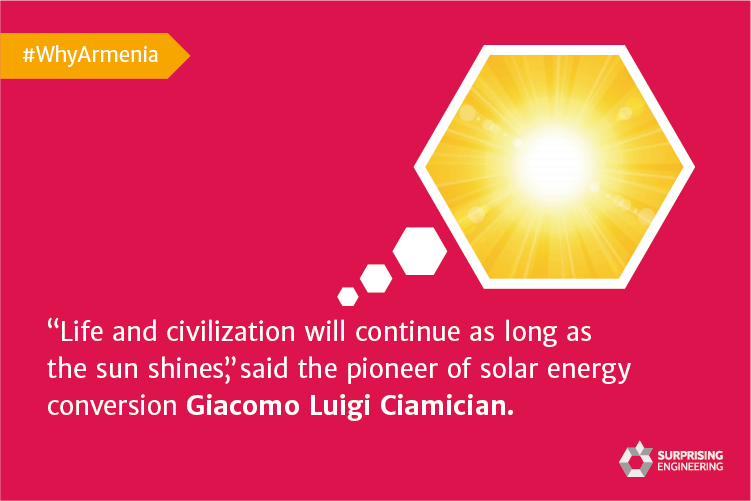 Let us find out why the chemistry department in the University of Bologna is named after Giacomo Luigi Ciamician!

Born in Italy to Armenian parents, Giacomo Luigi Ciamician was an Italian photochemist of Armenian descent. He received his PhD from the University of Giessen in 1880.

Ciamician contributed in many fields such as spectroscopy, organic chemistry and plant chemistry, but his focus was mainly on photochemistry, making him one of the founders of photochemistry.

Between 1900 and 1915, Ciamician and his assistant Paolo Silber published fifty photochemical papers. His interest in photochemistry was not theoretical; he saw the possibility of using solar energy to power human civilization instead of relying on coal. His vision makes him an early proponent of artificial photosynthesis. In his journal article, The Photosynthesis of the Future, he represents what it will look like if we replace all the energy sources that we use with solar energy:

"On the arid lands there will spring up industrial colonies without smoke and without smokestacks; forests of glass tubes will extend over the plains and glass buildings will rise everywhere; inside of these will take place the photochemical processes that hitherto have been the guarded secret of the plants, but that will have been mastered by human industry which will know how to make them bear even more abundant fruit than nature, for nature is not in a hurry and mankind is. And if in a distant future the supply of coal becomes completely exhausted, civilization will not be checked by that, for life and     civilization will continue as long as the sun shines!” (Ciamician, 1912)

His contribution was so influential that Ciamician is considered to be the pioneer of solar energy conversion and "green chemistry".

He indeed deserves to have a chemistry department named after him!