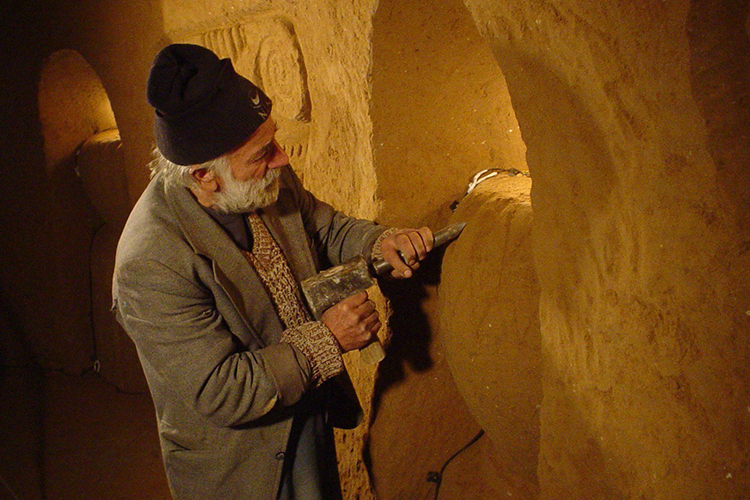 Pack your bags, we’re heading to Arinj this weekend! Located just north of Yerevan, Arinj hides a magical cave. No, it’s not Ali Baba’s cave (if it were, we wouldn’t tell anyone about it). The magical cave that I am talking about here was dug by Levon Arakelyan, who only used a hammer and a chisel.

It all started in 1985, when Arakelyan’s wife, Tosya Gjaribyan, asked her husband to dig a potato cellar underneath their house. When Arakelyan started the construction work, he simply couldn’t stop. His wife says that he was motivated by a voice who told him he must continue digging the cave. The potato cellar was no longer what he was building. Rather, he was creating a major work of art – something totally unique. Unfortunately, he passed away in 2008, leaving behind him an incomplete masterpiece.

When one first looks at the cave, it alludes to the secret passages we usually see in medieval castles or in movies. It is simply fascinating to see an old architectural style reproduced with such accuracy.

This cave is now a site that attracts both tourists and locals. Arakelyan’s wife is the guide at the site. The widow even runs a small museum where she displays the tools that her late husband used to build the magical cave.

Looking for a good adventure on a weekend in Yerevan? Visiting this cave will certainly sprinkle some magic on your day. Who knows, maybe you’ll find the reason why Levon Arakelyan dug this cave.