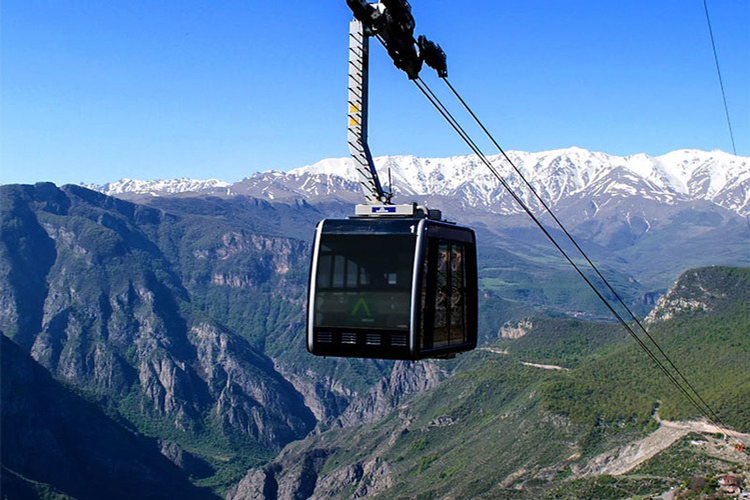 Is Armenia tiny? Yes! Nevertheless, it is one of the most culturally rich places on the planet! Some of Armenia’s treasures include UNESCO-listed cultural sites, such as the Cathedral and Churches of Echmiatsin and the Archaeological Site of Zvartnots, the Monasteries of Haghpat and Sanahin, and the Monastery of Geghard and the Upper Azat Valley, all included on the World Heritage List, as well as Armenian Lavash, Khachkars and Duduk, listed in the Intangible Cultural Heritage of Humanity list.

However, there is a lot more to discover here. The longest ropeway of the world, Wings of Tatev, is just another example.

In 2010, Armenian launched its next gem, a 5.7-kilometer (3.5-mile) cable car line that stretches over a stunning gorge to the country’s ancient Tatev monastery.

This journey allows the visitors to enjoy a safe and impressive drive over the spectacular Vorotan River Gorge. The cable car travels at a speed of about 37 km (23 mi) per hour, and a one-way journey takes about 10 minutes. An instructor introduces all the wonderful cultural sites and noteworthy points that can be seen from above, further enhancing the cultural experience. At its highest point over the gorge, the car travels 320 m (1,050 ft) above ground level. This might sound scary, but when you’re inside, you will barely have time to realize you’re that high above the ground! The cable car has two cabins, each of which can take up to 25 passengers, so you can enjoy your drive with your friends and family.

And to support our claims with facts, we can also note that on 23 October 2010, Wings of Tatev was officially recorded by the Guinness World Records as the world's longest non-stop double track cable car. The Monastery of Tatev is another candidate for the UNESCO World Heritage list. So, if you are looking for unforgettable adventures in the air, you don’t need planes! Wings of Tatev will take you to the sky!

Steps to be Made for Promoting SME Business Environment Reforms