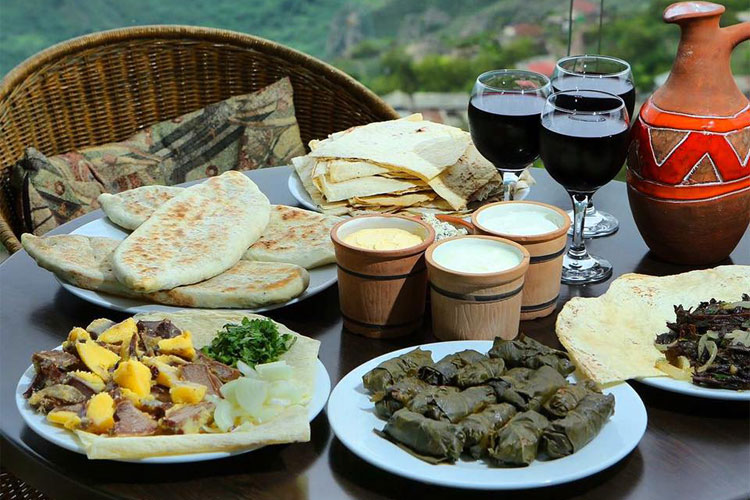 “A crust eaten in peace is better than a banquet eaten in anxiety”.

While there is plenty of time for work and anxiety, there should also be some time for rest and peace. If you are a fan of everything exotic, then trying out some Armenian dishes for your lunch can be a good option for you. In order to diversify your daily lunch, here is a list of some pretty delicious Armenian dishes.

First of all, let’s have a quick overview of what the Armenian cuisine is all about. It belongs to the Caucasian cuisine; therefore, Armenia and its neighboring countries have some dishes in common. What we can definitely say about the Armenian cuisine is that it does not use an excessive amount of spices but instead, emphasizes the natural flavors of the ingredients.

This is a type of dish prepared with meat and wheat. Though the preparation process is quite long, the results are worth waiting for. If you’re familiar with other national cuisines, you may find some similarities between Armenian Harissa, the Turkish Keshkeg, and the Indo-Pakistani Haleem. However, the Armenian dish has some essential differences. It is most often made of chicken, though variants with beef and pork also exist.

Khash is a seasonal food that the Armenians eat on the cold months of the year. As the national tradition suggests, it should be eaten during the months that have an 'r' in their spelling. When these months are over, i.e. in May, Khash is no longer suggested as a good option. It is mostly eaten early in the morning, preferably in a cold place, for example in the mountains. Khash is mainly made of lamb or beef feet slowly cooked overnight in water. It is served with crumbled dried lavash, garlic and vodka.

Armenian cuisine is quite popular for including a moderate amount of meat in its dishes. Khorovats is probably the most famous meat dish, which consists of grilled marinated meat on a skewer. The bones are generally not taken out of the meat. This is the number one dish at any Armenian gathering or party. Preparing Khorovats in a special clay oven resembling tandoor makes it even more delicious.

Ishkhan is a famous Armenian species of trout, also called Sevan trout. It can be grilled, steamed, cooked in the oven and even stuffed. In any event, you’ll really be delighted by its taste.

For the fans of light and delicious soups, the Armenian cuisine offers Spas, which is made of Matzoun, an Armenian alternative for yoghurt. Spas also includes wheat and herbs, mostly cilantro.

Though we’ve included only five of the national Armenian dishes, you can discover a lot more by delving deeper into the cooking traditions of Armenia. Sometimes the discovery of a nation starts right from its cuisine and if you choose this path you’ll find a lot of interesting stuff on your way.