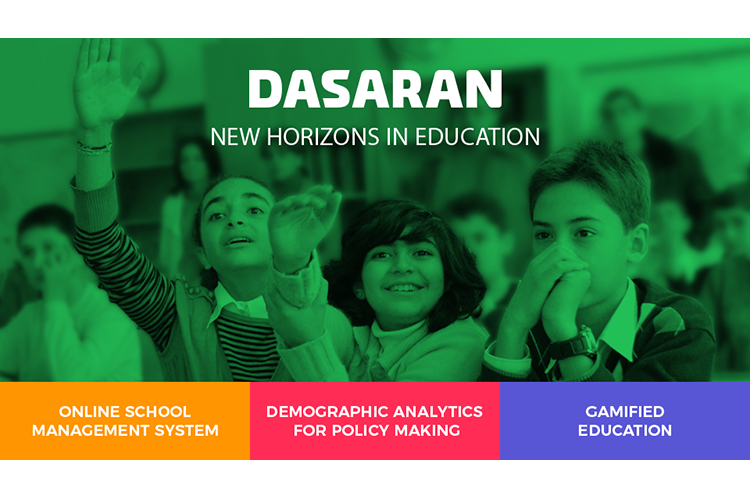 Dasaran is a unique, online school environment that connects all schools across Armenia in a unified virtual platform, with a community of nearly one million users, including school children, parents, teachers, and principals. We’ve spoken with Rima Sargsyan, Project Manager at Dasaran, and Emily Gubbins, an English teacher who runs the “English with Emily” section of the platform.

WA: Tell us the story of Dasaran. Where did it all start? What makes it unique?

Rima: The Dasaran educational program was founded in 2009. “Dasaran” in Armenian means “classroom”, and so the idea behind this program was to create a “huge classroom” where the pupils, the teachers, and the pupils’ parents could be united in a single platform. Dasaran is an online platform that integrates modern technologies with educational modules, providing high-quality education to all Armenian schoolchildren. It also eliminates the gap between Yerevan and other regions, since most of the resources are currently concentrated only in Yerevan, including the high-quality education opportunities, financial and business aspects, etc. The kids in the other regions do not have enough opportunities to discover and realize their full potential.

Emily: For example, Dasaran provides a platform where an entity, like a museum, can have a page and disseminate information for kids to access. For me, this is really cool because Yerevan has a lot of access to English, but I’d say that most of my most active followers on my English page are from the other regions - from an area where they might not have a chance to come across English every day or where they have textbooks that are either outdated or quite flat. Dasaran gives them a chance to interact with information.

Rima: I’d also like to add that it’s been eight years that Dasaran has been carrying out its activities, and we have managed to connect all the public schools in Armenia and Artsakh, which makes a total of 1501. The number of registered users has now reached a million, with nearly 700,000 active users among them. However, not just anyone can get registered on the site. We have a very safe and secure platform intended for individuals connected to schools. We have three main categories, including schoolchildren, teachers/principals, and school staff and parents. Whenever a parent or a school student wants to access the platform, they need to do so with an ID card. So, by “one million users,” we mean unique users, excluding the chance of there being fake accounts among them. That makes almost one third of the population of Armenia.

We do not only cover traditional subjects taught at schools, like Math, History, Chemistry, and Geography, but we also try to provide civic education for kids. We have developed more than 50 interactive games that teach them things about social inclusion, human rights, tolerance, environmental protection, and generally anything that comes with civic education. So our aim is not just to reach academic excellence, but to raise a modern citizen for the country.

WA: Do you cooperate with local organizations and companies? If so, could you talk a bit about the most significant collaborators?

When Dasaran was founded, it had to pass a probation period, and since we were dealing with the educational sphere, we needed to cooperate with state institutions as well as local and state authorities. So since then, we’ve established close cooperation with the Ministry of Education and Science, the municipality of Yerevan, and many other governmental bodies. These connections enable Dasaran to be more efficient in our work. With the support of the government, it was easier to connect with schools from Yerevan and the other regions.

Just recently, we had the representatives of the Ministry of Emergency Situations and the Crisis Management State Academy representatives visit us, and we’re currently thinking of ways that we can teach disaster risk management to the kids.

The other direction for collaboration involves the international organizations operating in Armenia. We cooperate with the EU Delegation, the US Embassy, UNICEF Armenia, and many others. The main formula is that we do not want to create content; rather, we supply a mechanism to deliver educational material to the users. So we try to shape our partnership in terms of making whatever they do more effective in reaching a large audience of kids.

WA: Do you have any connections with foreign companies? What do they appreciate most in the Armenian workstyle?

Rima: Speaking of foreign companies, we can mention a number of American and British organizations. Last year, Dasaran was recognized as one of the top five innovative enterprises in the world within the scope of an initiative organized by Impact Hub Geneva and the UN Development Program. During our meetings in Geneva we’ve established cooperation with companies like the Boston Consulting Group, which helped us with consultancy about how to scale up Dasaran, which aspects to take into account, etc. Recently, we officially launched one of the major components of Dasaran, which we call the E-stat Diagnostic Tool for Public Education, an electronic tool that diagnoses the educational system, identifies gaps and challenges, and helps us understand how we can deal with them. It’s been provided to the Government and Ministry of Education of Armenia so they can make more data-driven and informed policy decisions. In designing this tool, we received huge support from several data analysts from Harvard University, who helped us to identify the major indicators in the educational field and connect those to the right data for policy making.

Emily: As for the Armenian workstyle, Harvard experts gave Dasaran the nickname “Armenian Know-How.” It’s an affectionate way of recognizing the innovation in the Armenian population, and other companies have had the same reaction as well. They all speak about the spirit of creation and innovation of Armenians. That’s very impressive.

Rima: As for the future plans, there could be two directions: inside and outside Armenia. For inside Armenia, we now have 100 percent penetration into public schools, so we’re just trying to strengthen the network we have in Armenia and to enhance it with new tools to facilitate the work of teachers. One of our short-term plans is to build something like a virtual faculty for the teachers, which would connect a teacher from Yerevan to a teacher from the other regions in order to discuss the curriculum, share plans, and just share their experiences with each other. We’ll most likely have completed this by the end of the year or the beginning of next year. We are also trying to enrich the platform with new content, info, and more opportunities for kids to be creative within the platform. With this, we are trying to promote project-based education in Armenia. As for plans outside Armenia, we have great ambitions to scale up Dasaran to other developing countries in Africa and Asia. This will allow us to present Armenia as an education-exporting country. There is little information about Armenia, and we will try to change certain preconceptions about our country through such projects, presenting it as a home of brilliant minds and innovation.

WA: How do you evaluate the Armenian IT potential as a company overlooking both the educational and IT spheres?

Rima: Having an overview of how children progress throughout the grades, we try to track the basic directions and spheres in which they are most involved. For example, there is a huge interest in IT — every time we host kids here and ask them about their future profession, almost a third mentions IT. Our automation tools also allow us to make predictions about the coming years. Kids have a huge potential, and if given the right direction, they will become great specialists in their fields. But it will take improving the whole educational system.

WA: As someone involved in the educational sphere from outside Armenia, how would you describe the Armenian approach towards the learning process in general?

Emily: It’s a good question, since I’m an outsider with a fresh perspective. I work in a public and a private school and I see a lot of kids here who are very eager and curious. Curiosity seems to be a natural component in minds here. Students want to learn and be the best they can be. In many cases, however, they do not have the resources to take their curiosity to the next level. I admire Dasaran’s potential in helping them do that. There is something unique about the enthusiasm for learning in Armenia – the Armenian community has a long and rich tradition of education; it is a value that seems to be deeply engrained in the culture.