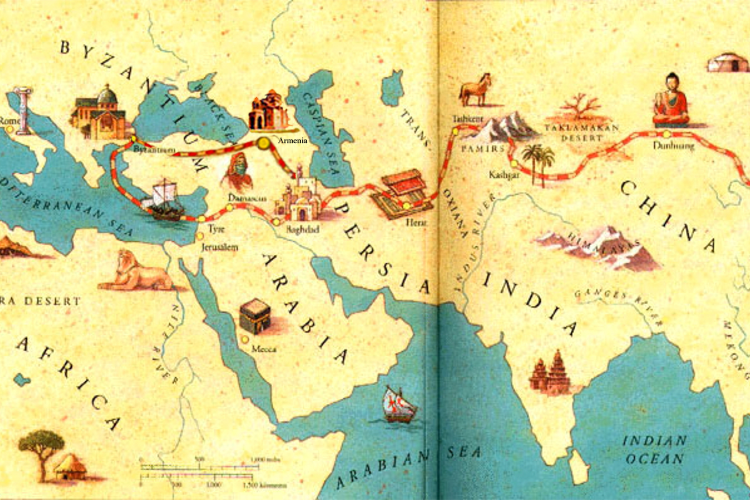 Armenia, One of the Oldest Countries on the Silk Road

The Great Silk Road of the ancient civilizations.... How much do you know about it? Many of you might note that it was the most important ancient route for trade and communication, and all of you out there would be right!

But wait! What does Armenia have to do with it? In fact, Armenia has been on the very crossroads of The Silk Road. Traders and merchants were the most mobile and active people in Armenian society (which was, overall, quite mobile, too!). Add to that the super-talented Armenian artisans, and what do you get? Their wonderful pieces were known in every kingdom, from Persia to China and from India to Europe.

It’s hard to always be honest as a trader. Armenians, however, were known as some of the most honest and punctual people. Later, in his anthropological studies, Immanuel Kant noted the following:

“Among another Christian people, the Armenians, a certain commercial spirit of a special kind prevails: they wander on foot from the borders of China all the way to Cape Corso on the coast of Guinea to carry on commerce. This indicates a separate origin of this reasonable and industrious people who, in a line from North-East to South-West, they travel through almost whole extent of the ancient continent and know how to secure a peaceful reception by all the peoples they encounter. And it proves that their character is superior to the fickle and groveling character of the Modern Greek.”

Kant, however, is not the only one to speak highly of the Armenians. Here’s David Hume, who wrote,

“Thus the Jews in Europe, and the Armenians in the East, have a peculiar character; and the former are as much noted for fraud as the latter for probity.”

Meanwhile, this geographical location proved to be fatal for Armenia as well, placing the country in a hotspot of all the wars and battles between empires. This repeatedly subjected Armenia to conquests by and conflicts between other countries.

Nevertheless, this process strengthened and increased the cross-cultural contact between Armenia and other nations. As a result, Armenia needed to preserve its national identity and to work even harder on retaining and passing forward its cultural legacy.

What kept the Armenian culture and traditions alive and thriving was the ethereal Armenian innovative spirit, shaped and perfected on the crossroads of civilizations and hugely contributing to the development of humankind. This is probably the biggest benefit Armenia has received from its role as one of the oldest nations on the Great Silk Road.

Armenia through the eyes of an Artist: an Interview with Maïda Chavak